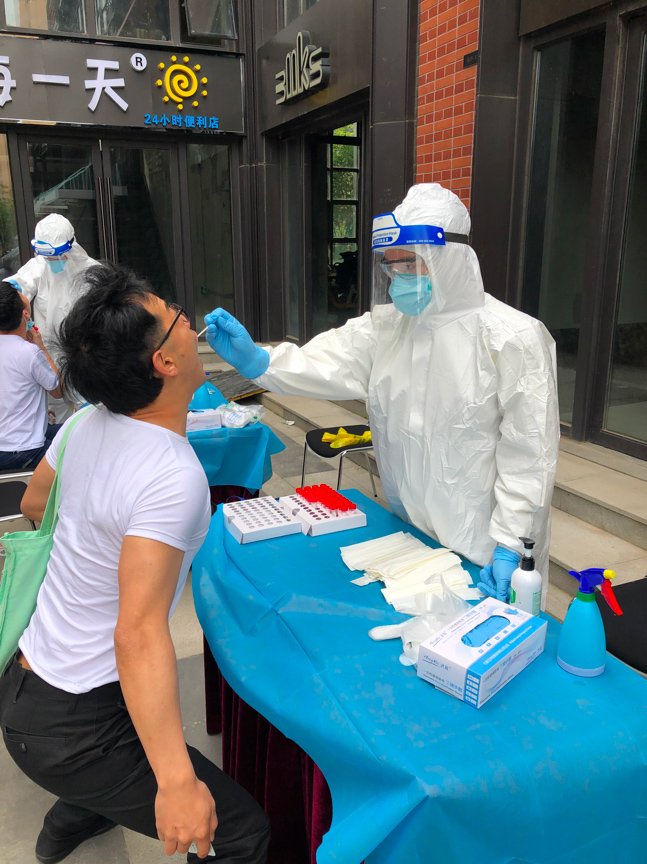 These pictures were taken on May 20 in the neighborhood where I currently live to document the nucleic acid detection of 2019-nCoV.

Since May, the Wuhan government has planned to complete free nucleic acid testing for all citizens within 10 days, starting from May 12. The plan was announced after several more residents were diagnosed in different districts of Wuhan. Two days have passed, I still haven’t received the test result. I am very worried. because if the result is positive, it means that I and the people I have been in close contact with will have to be quarantined. Then our life and work will be greatly influenced. For example, we would be facing the real pressure of monthly mortgage payments and also including psychological pressure.

Since lockdown in Wuhan on January 23, I have been worried every day that people around me are Covid-19 patients. By February, I was always wondering if I was infected. In March, I always suspected that I was a possible patient. In April, I often suspected that I was asymptomatic but infected. In fear and trembling, we finally made it to May. Now, the government enables everyone to do the test. Give the government a thumbs up on this point.

By the end of March, the epidemic in Wuhan was effectively controlled. To get citizens’ lives, social order, and economic activities back on track, the government has been working hard to prevent and control the epidemic while vigorously promoting the work resumption and boosting the economy after Wuhan lifted its lockdown on April 28 (except for schools, cinemas, and large gatherings). However, the results have been minimal, which mainly depends on two aspects. On the one hand, the shutdown of all walks of life for two months led to the closure of enterprises, out of work employees, and the breakdown of industry supply chains at home and abroad. On the other hand, citizens in Wuhan, like people in other countries, are still in a state of semi-quarantine due to the shadow of the epidemic. They have to cut off all unnecessary going out and consuming. It will certainly take time for Wuhan to return to its pre-epidemic state, not to mention the economic and cultural links between the outside and Wuhan. Overall, Wuhan is entering the post epidemic period.

By carrying out a citywide test at this time, Wuhan is sending a signal to its citizens and people all over the country that Wuhan is becoming “safe”, even more than any other city in the world. Since the global outbreak, no government has been able to spend RMB 2 billion on free testing for 12 million people in 10 days. This is not only another magnificent feat of the heroic city of Wuhan, but also a miracle. It is bound to push Wuhan back to the normal track as soon as possible.

Currently, all people are most afraid of asymptomatic infections. Therefore, I sometimes wonder if it would have been better to take these strong decisions and measures before Wuhan lifted its lockdown on April 8.
As a Wuhan artist in the epidemic, what I hope is that Wuhan and other countries around the world can effectively control the epidemic and get out of it quickly. Get the world back in order. Let the people of the world still communicate with each other only one cabin door away.
As I write this diary, a friend in Rome told me that Italy had reopened yesterday. At this moment, I thought of a Chinese proverb, “Good fortune follows upon disaster, while disaster lurks within good fortune.”