Wuhan, located in the middle of China, is referred to as “jiu sheng tong qu” which means that it’s considered the main thoroughfare of nine provinces. 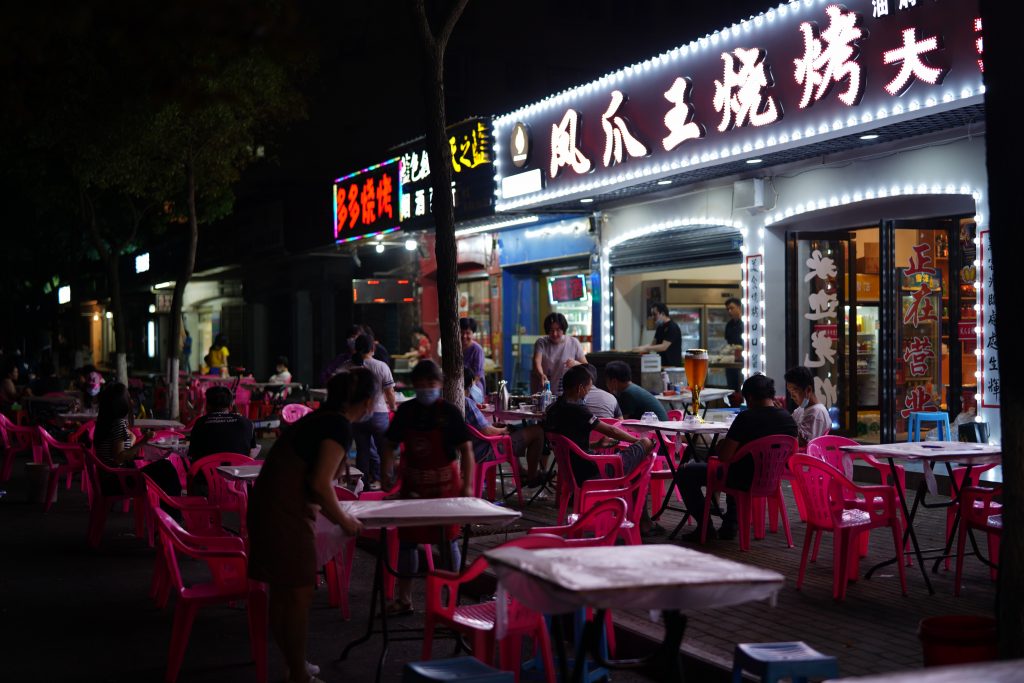 Wuhan also enjoys the reputation of being a gourmet city, combining various Chinese cuisines from north to south. Although my fear of a Post-Epidemic still exits, I am a person who pays great attention to diet and body management. The night before yesterday, I and my friends Yang Hao, Zhang Chong, Tang Jing, and two girls had a very satisfactory siu yeh at Mahu night market. This is also the first time I went out for dinner since the outbreak in Wuhan on January 23, counted as more than 120 days ago. Today’s dinner guests at the market are not too many, only a total of 3 to 4 tables. Usually, at this time of year, there are at least 10 to 20 tables. The restaurants are next to each other and brightly lit. Six of us ordered a platter of six crayfish (steamed, garlic, braised), bean salad, lotus root, and a variety of delicious dishes including barbecue lamb, chicken feet, squid, potatoes, and Chinese leeks. We could order and receive almost every one of them. We also ordered 5 oysters, one for each. (Wuhan people think that it has the function of Tonifying Yang). We drank more than 20 bottles of beer, ate gluttonously, gossiped, talked about life, asked for ideals and escapism from reality. We talked about our own stories, but we didn’t talk about the epidemic in Wuhan. After a full meal and drink, we spent 1,520 Chinese Yuan ($213). Finally, I had to hire a designated driver. 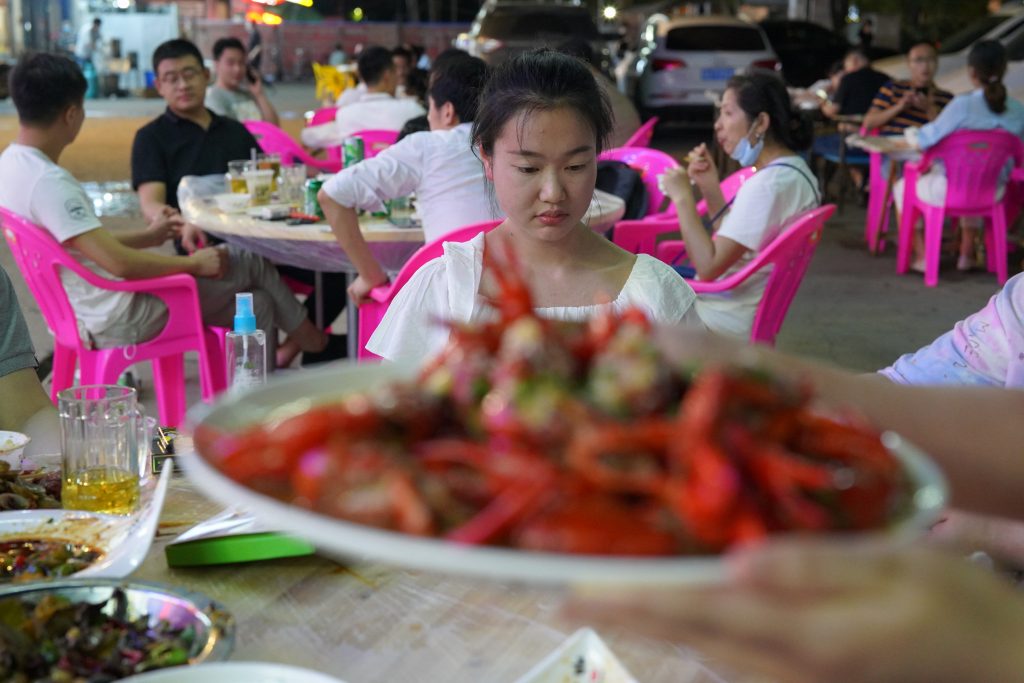 Speaking of whether Wuhan is alive or not, we really have to take a look at siu yeh, especially the sales of crayfish in Wuhan. The city’s obsession with siu yeh is crazy. Throughout the year, regardless of holidays and festivals, people go out to dinner, not for lunch or dinner, but for a midnight siu yeh from 8 pm to 2 am or 3 am. No matter if it is indoors or outdoors, most of the men were bareback, wearing only shorts and slippers. Wuhan people are naturally high-pitched and speak in a loud voice. So, people who are not familiar with this way of speaking will think that we are all in a quarrel. This is part of the character of Wuhan people, and coupled with the spicy crayfish, barbecue, and cold beer, it makes a distinctive summer in Wuhan. 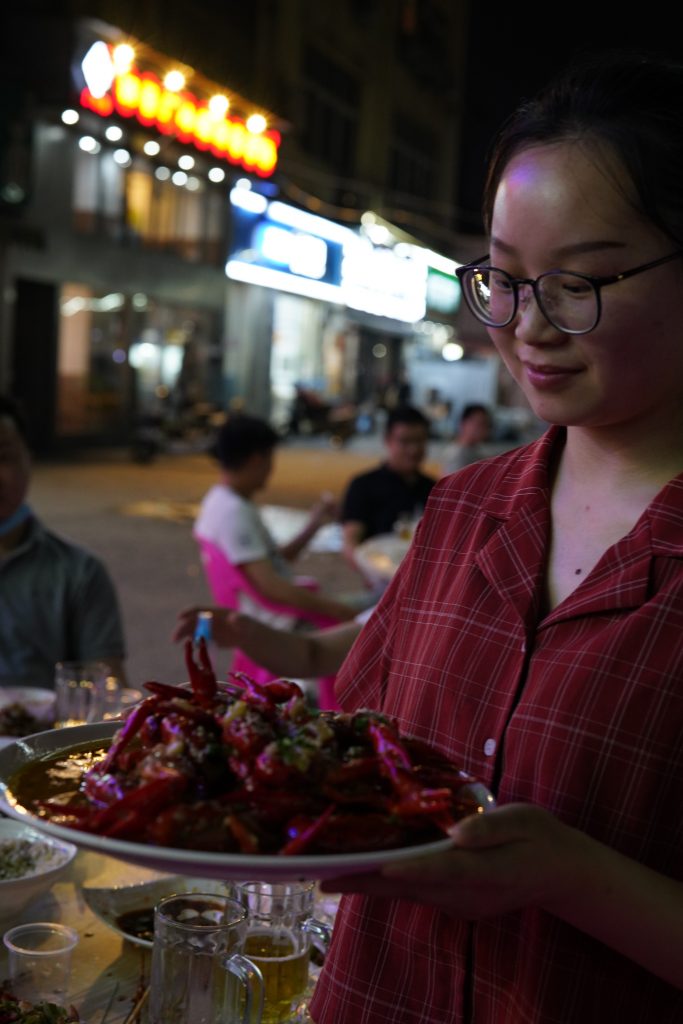 However, people in Wuhan are bound to have a less enjoyable summer this year. Masked grills and waiters inadvertently remind dinners that Wuhan is still not “safe.” Everyone had to show the results of nucleic acid testing before eating, which we jokingly called “siu yeh pass.” Crayfish have been on sale for as little as 68 Chinese Yuan ($9.5) per plate, but sales are limited. Beer is already available for free in some restaurants. But there is still no confused noise of voices enjoying the eating of crayfish, enjoying beer drinking, and not to mention after the siu yeh “Zhuang Chang”(turn) KTV impulse. At this time in the previous year, crayfish was sold at 198 Chinese Yuan ($28) to 298 Chinese Yuan ($42) a plate. Wuhan people can eat 50,000 tons of crayfish a day, and the annual consumption of crayfish is more than 100 million Chinese Yuan.

In post-epidemic Wuhan, from the government to enterprises, from the media to individuals, we are experiencing various efforts to restart and rebuild every day. Wuhan’s siu yeh is a “barometer” of the city’s recovery, but it is still not optimistic because of the various weaknesses in spending power. Currently, the main consumer of siu yeh is 70, 80, 90 and this group of people are homeowners. The economic downturn in the general environment has forced them to balance their income and consumption while rebuilding their mental health. Another reason is that Wuhan is known as a university city. At present, all universities have not opened. Without the spending power of 1.8 million college students, Wuhan’s siu yeh will naturally not be as prosperous as it used to be.

I miss the summer in Wuhan.